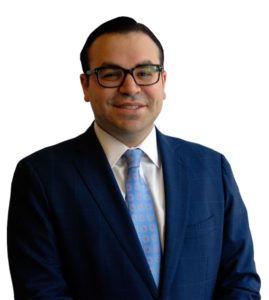 Mr. Richman is the Managing Member and Founder of Richman Law Firm PLLC. In his role as Managing Member, Mr. Richman oversees the day-to-day operations of the firm and handles the litigation of the most complex legal matters across a vast array of practice areas and disciplines.​

Prior to the founding of Richman Law Firm PLLC, Mr. Richman was a trial and appellate attorney at a New York City law firm where he litigated and tried various cases in multiple venues throughout the State and Federal Courts in New York. In addition, Mr. Richman briefed and argued numerous appeals in some of the highest courts in the State of New York.

Mr. Richman earned his Juris Doctor from the Touro Law Center where he held numerous leadership positions, including being the Editor-in-Chief of his Law Journal, a member of the Trial Team, and a co-founder of the Business Law Society.

​To date, Mr. Richman has won numerous awards including the Nassau County Comptroller’s Award for Excellence in Leadership and has been named a New York State Super Lawyer in the Rising Stars Category in Metro New York for 2017, 2018, 2019, and 2020.​

Personal Injury Law: Frances Melia v. Bishwanan Jagmohan, Index No. 708307/2015 (Queens Cty. Sup. Ct. 2018) whereby Mr. Richman litigated the matter to a verdict of $2,000,000.00 on behalf of a 92-year-old individual who was forced to undergo multiple surgeries including an amputation after being struck by a commercial heavy truck.

Submit this form to have your case reviewed by our attorney.

Commercial litigation or a business dispute can stall the growth of your business and distract from your future goals. Rather than let your business flounder in a dispute or disagreement, hire a business law lawyer that understands the impact on your company and can provide viable and successful solutions to any case.

If you are injured because of the negligence or recklessness of another person or company, you deserve a knowledgeable New York lawyer, who will fight for you. A personal injury can cost you time, money, and even future wages, but a skilled lawyer can help you recover financial losses from a car accident or other personal injury.

If you are facing a dispute with regards to your real estate, whether it be residential, commercial, or an investment property, in New York State or elsewhere, Richman Law Firm provides personalized and strategic representation for any and all real estate disputes.

Class action and mass tort cases are a unique subset of civil litigation and commercial disputes. Often, it requires specialized knowledge to bring a successful case, and not every lawyer is prepared to take these cases. Your major case or class action lawsuit requires the dedication and time of a top New York City lawyer.

Businesses who seek to grow need the backing of an experience business law attorney who can help steer businesses on the best path to success.  Look no further than our team at Richman Law Firm PLLC for business consulting and advice.

Mr. Richman is the Managing Member and Founder of Richman Law Firm PLLC. In his role as Managing Member, Mr. Richman oversees the day-to-day operations of the firm and handles the litigation of the most complex legal matters across a vast array of practice areas and disciplines. ​

Richman Law Firm PLLC
4.9
Based on 26 reviews
See all reviewsWrite a review

Noelle Chen
20:47 05 Mar 21
Scott was very knowledgeable and responsive to all our questions and concerns. He represented us with the utmost professionalism and we will definitely call on him again.

Carrie Grapstein
22:15 13 Feb 21
Did a great job. He was quick, efficient and effective

Natasha Rivera
21:17 11 Feb 21
Scott was a great help in navigating some incredibly frustrating issues with my apartment, repairs and the board of the condo. Once I sought Scott’s services, his work made months of issues be resolved so much faster and with great attention.I also appreciated how clear and straightforward Scott was regarding pricing, options and pathways forward.

Saurabh Mehta
15:11 04 Feb 21
Scott was great at understanding our situation and helping us come to a conclusion with the other party. He is on top of everything for you and makes the process very easy. More importantly, he's straight forward, honest, and is very intuitive to making sure you will receive value for what you are paying for. Appreciate all the advice!

Emma Woods
13:13 15 Dec 20
Scott Richman is a life saver. My husband and I were locked into a lease in a building that seemed pretty okay when we moved in, but we quickly found to be absolutely awful (cockroach infestations, dead mice in the walls, smoking in the lobby of the building, no masks, etc.). Our landlord had taken to just ignoring our calls and emails asking to break our lease. They decided we could break it for a 3 month penalty, which is NOT realistic or okay. Scott got her attention, and got us out of the lease in return for us allowing them to keep our security deposit. He saved us a ton of money, and did it SO fast - I think the entire process was about a week in total. Scott knows what he's doing, and he's a great person to have in your corner when you're in a tough spot! Thanks again Scott!

Leisha Majtan
17:59 05 Dec 20
I had never worked with a law firm in the past and was always hesitant to do so. But Scott Richman came highly recommended to assist with an accident I had back in July of 2020 and I must say his professionalism and diligence with my case was outstanding. He explained the process thoroughly and answered all questions expertly. I would not hesitate to use him again.

Sean Ajifowobaje
01:00 24 Nov 20
Scott did an awesome job handling the renegotiation of my non-compete agreement. He was straight forward, timely and professional. I would recommend him to anyone in regard with dealing with contract agreements.

Paul Berge
17:20 11 Sep 20
Scott Richman was hands down the best attorney we have ever had. He helped our company solve a tricky and challenging problem with speed, efficiency and professionalism. His knowledge and attention to detail go well beyond this 5 star rating. He is exceptional at what he does and I would highly recommend him.

Yasir Sitara
21:53 07 Aug 20
I came to Scott looking for help in reviewing my film contract, and I got exactly what I was looking for and then some! His communication, diligence, and knowledge of all things pertaining to the law is second to none.. and he adds a light touch of humor along the way. Scott Richman is a man of class and i would highly recommend him to anyone reading this, you will not be sorry!

Robert Rosenfeld
17:59 27 Apr 20
As an attorney myself I appreciated Scott’s diligence, enthusiasm and communication. We finally got the primary carrier to put up its policy limits so that an underinsurance arbitration can be demanded. I’m confident that Scott will continue to fight to maximize my recovery.

Mindy Jezierski
17:01 30 Mar 20
I was highly recommended to Mr. Scott Richman through a family member of mine. Mr Richman was very professional and attentive to our situation. He walked us through the whole process of what to expect as we were looking to be compensated for our daughter’s injury due to a car accident that she was involved in. His time and attention to our case left a positive impression on us. He answered all our questions, emails and phone calls in a speedily manner. I wouldn’t hesitate to recommend him to anyone else that is looking for a caring and attention to detail lawyer such as him.

Aaron Silbert
20:45 17 Jan 20
In a pinch, I needed general legal services within 24 hours. After a quick search, I found Scott and his firm and gave them a call. Scott answered the phone, took the time to walk me through what was happening and what I needed done, and then went out of his way to make sure it was taken care of that day. He even met me after business hours to ensure everything was taken care of, even printing out extra copies of everything to make sure I had one on file. I highly recommend Scott and his team for any of your legal needs - he is fantastic!

Sasha Roudenko
15:31 15 Oct 19
Scott Richman took a painful and unpleasant experience and helped me navigate it while always being available to answer any questions or address any concerns whether it was via email or phone. He always took the time to explain everything including any areas of confusion without making me feel stupid or small. He was always respectful, very knowledgeable, and worked so hard on my case. I cannot recommend him highly enough for any legal needs you may have.

Erica Carter
21:12 12 Sep 19
Scott Richman handled my case with the utmost care, respect, and expediently. I had a civil matter that he resolved for me, and leaving this matter in his hands was the best thing I could have done. He communicates effectively and often, and ensures that as his client you are never in the dark. Very grateful for his services and give him my highest recommendation.

Michael Feinberg
15:04 08 Aug 19
Scott Richman is an extremely honest and professional attorney who helped settle my personal injury claim. His work is thorough and reliable. Additionally, Scott makes himself available for his clients and truly focuses on making sure that his clients needs are timely met.

Kristen Epifania
20:31 31 Jul 19
Mr. Richman is a respected colleague with impressive experience in civil litigation. I have seen his work firsthand and he is a powerful advocate and extremely knowledgable in his field. I would trust him to handle my own matter and recommend him to anyone in need of a civil attorney.

Mehdi Essmidi
20:45 25 Jul 19
Mr. Richman is one of the most capable civil litigators I have met. He conducts his practice fairly and ethically at all times. He always approaches each case with several strategies, he has no problem standing up for his client’s interests, and he uses his talent for quick thinking to resolve issues for his clients very efficiently. I have referred several clients to his firm because I trust that he will do excellent work for anyone that retains his services. I endorse this lawyer.

Robert Golden
20:22 24 Jun 19
Mr. Richman did a wonderful job handling an estate issue for me and my family. It was frustrating at times do to attorney’s on the other side, but he persisted in a very professional manner and got the job done. Thank you.

KayBienne Rosado
16:14 24 Jun 19
Richman Law Firm PLLC is an amazing firm and worth working perusing is you need a lawyer. Scott Richman works hard and took care of everything quickly. He was easy to get a hold of, answering emails and phone calls immediately almost every time. He settled my case within a little over 8 weeks. He was in constant contact, keeping me up to date on the progress of my case. After settling my case, he reached out often to be sure I received my check and to confirm that all looked as promised per our contract. He answered every question, never making me feel stupid or small. He is a great guy to work with, very nice and very professional. Hire this firm, you won’t regret it.

Adam Hersh
17:17 21 Feb 19
I strongly endorse Scott. I have known Scott for years. I am an attorney in Florida, and whenever I have a client who needs legal representation in New York, my immediate thought is to call Scott. I have worked on several matters with Scott, and I am very impressed with his excellent work ethic and strong attention to detail.Scott makes sure to focus on the right issues to get the best outcomes for his clients.I strongly recommend Scott for those in need of a strong, aggressive attorney in New York.
Next Reviews